I feel it’s important to try and write things down and share experiences on these great adventures.  In many ways the journey of a 100 mile race becomes a transcendental and surreal dream-scape.  Like my nightly dreams, the raw experience of the race gradually fades away with my gradual return to everyday life.  Capturing a little bit of the experience here hopefully preserves some of my memories, provides insights to my friends and family, and also maybe helps a future runner of this and other races.

The Mohican 100 is in Southeastern Ohio at the Mohican State Park.  With family logistics being cheaper and easier with 1 traveling vs. 4, it was decided some time ago that I would venture out on this trip solo.  I stayed at the Mohican Adventures campground in the meadows.  I didn’t realize it at reservation time, but the race runs right by there (tip: ask for a campground close to the showers).  This made packing my drop bags much easier as I knew I could stop at my car if something unusual came up during the race.  I met some great folks from all over who were all there for the race.  Mixed in with the regular family Father’s Day camping crowd, it was quite the scene.  My favorite part of the campground was it coming to life around 3:30am as everyone was prepping for the long day ahead.

The Training
If you judge training only by the miles you put in; the number of marathon distance training runs; and/or the back to backs you do every weekend; then this training cycle was pretty terrible.  After the Umstead 100 in April, I took some planned time off.  After that I ended up with a nasty cold that kept me from training for at least a solid week.  This was quickly followed by a freak turf-toe injury.  Eventually I had to start running again.  I kept up with my cross training, and ran where I could and tried to stay patient and let the fitness come back.  Eventually I managed a 20 and a 30 mile run; and maybe 150 miles total in two and a half months.  Nothing near what I’d like to have heading into a race like Mohican.

On the other side of the coin, if you define training as the process that puts you in the best position to complete your goal – I feel like my training was very successful.  Had I simply tried to plow through these obstacles, I risked putting myself in a position where I might find it challenging to even make it to the starting line, much less be considering a finish.

The Course and Race

Having never run at Mohican State Park before, I had no real plan of attack put together.  I had no idea how the terrain would roll together and what to expect mile to mile.  This was actually a welcome adventure as my last race was my hometown race where I knew the course like the back of my hand.  At Mohican, I simply set out to take what the course gave me and enjoy the cool temperatures while they lasted.  I finished the first lap in a little more than 6 hours and could feel the heat of the day coming on as well as my lack of training in my legs.  The first seeds of doubt. 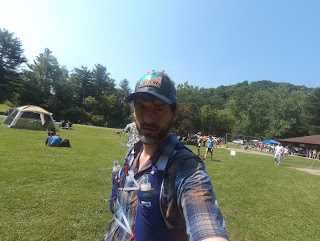 The heat bearing down at the start of lap 2
The start of the second lap I was a little grumpy (right where you should be for 27 miles!) but decided to simply take it easy for the climbs up to the first aid station.  The strategy worked and I felt strong for the next section to the fire tower.  At fire tower I took my first of many, many glorious sponge baths.  The heat and humidity were kicking.  From hear on out the goal became heart rate management and managing core body temperature.  I’m somewhat used to the heat being from North Carolina.  What heat acclimation has taught me more than anything else is to respect it, walk as necessary, and be patient.  Especially with being undertrained I knew patience, respect, and humility were going to be the only paths to a successful finish. 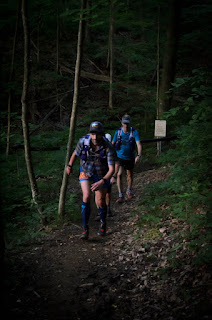 Photo Credit: Bruce Phillips Photography
Leaning in to the climb
The Dark Place
The darkest moments of the race for me came at about mile 50.  On the long descent from Hickory Ridge I smashed the hell of my foot.  I kicked a root so hard I yelled out a loud F_____K!  The kind you save for when it really really hurts.  I managed to stay upright and kept moving to “run it off”.  The adrenaline wore off pretty quickly and my toes were telling me they were hurt.  My mind raced with the possibilities, are they broken?  Will I have to drop? Is my foot bleeding?  Maybe I just smashed my nail?  If I dropped, would I being weak?  Maybe I should give up running entirely?  That kind of self-questioning and self-examination went on for the last four miles as I walked most of the way in to the aid station.  Being solo, I didn’t have any crew to pick cheer me up at the aid station so I called home and got a nice pick me up from my wife.

At the aid station, I grabbed a slice of pizza and sat down with the podiatrist group from Kent State.  We took of the shoe, and there was no blood to be seen (positive).  We took off the compression sock (always fun at 54 miles) and all the toenails were there (yay!).  After some bending and pressure tests she declared nothing broken, only to expect some bruising, and that if I could handle the pain I could go on with the race.  Best.News.Ever!  She buddy taped the toes and off I went for lap 3.  All in all I took a half hour at this stop, but it was necessary and I could feel recharged from the rest.

The Night
It never cooled off at night.  Yes, the temperature dropped, but it was still in the 70's with high humidity for most of the night.  I was still climbing great at this point.  The quads and the downhills were progressively becoming more and more iffy.  I just kept doing what I was doing keeping my effort level in check and using Ice, Icees, sponge baths, and ice chips wherever I could to keep myself cool and not over-exert myself.

One of the fun parts about the night time is that you start to notice the wildlife around you in an entirely different light.  My favorite scene was the first climb on the way towards Firetower.  The forest floor is covered with ferns that are three and four feet high.  What made this particular section spectacular were thousands and thousands of fireflies lighting up amongst the ferns in the night hours.  It seemed like it was straight out of a Thomas Kinkade painting.  The other fun encounter is when I came upon three younger raccoons on the trail and had a bit of a stare down.  My headlamp lit up these massive eyes that just stared back at me – not quite sure what to make out of the guy at 2 in the morning running down the trail.

Trail Angels are Real
Coming into the end of the third lap and start of the fourth and final lap, I determinedly ran a quick and efficient run through the aid station.  I was ready to get moving on finishing.  As I’m about 200 meters out of the aid station -giving wide berth to a skunk scavenging someone’s supplies – I hear a voice running to catch me.  “Are you running alone?  Do you want a pacer?”  “Yes, Yes I do want a pacer”  Insert Megan from Cincinnati who saved my race.  Sometime around the 24 hour mark I became almost uncontrollably drowsy.  My body just wanted to crash.  Simply having a pacer watching over me for that hour period kept me moving.  As it was, I barely felt like I could keep moving.  Had I been alone, I almost certainly would have been sitting on a log, catching some z’s…and who knows what would have happened at that point.  Megan accompanied me all the way to Covered Bridge (mile 89).  With the sun up and some coffee in my system I was rejuvenated to finish the last 2 sections to the finish. 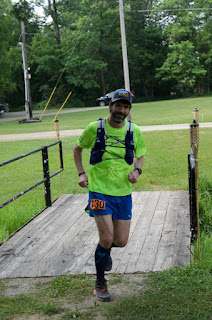 Photo Credit:  Bruce Phillips Photography
Finish and Aftermath.
I ended up finishing in 30:25:52. There were 188 starters, 91 finishers, and I finished 61st out of those 91 finishers.  The goal for this race was simply to finish, earn my WSER ticket and points; and take the hot summer off.  I’m learning quickly that for 100 mile events it only takes 1 or 2 variables to make or break your day.  Given the training I put in (or didn’t put in more precisely), I was lucky to keep things in front of me the whole day.  But that may also have saved me.  I didn’t have any illusions of grandeur about personal performance. 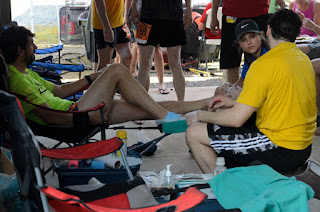 A final footnote and shout out to the community and ultra folks taking care of each other.  As I recombobulated in the finish line aid station, it dawned on me that after being up for 35 hours I was in no shape to drive myself to Columbus for my flight home.  Enter Travis (who ended up being an old friend from Canyon’s 2017), Drew, and Irene who put together a plan to drive me and my car to Travis’s house, and eventually to the airport.  Thanks guys, you totally made Father’s Day still happen for me!