The 2015 edition of the JFK 50 Mile run wasn't even on my race calendar at the start of 2015.  The 2014 JFK50 was my first attempt at the 50 mile distance and was intended to be a stepping stone to some longer ultras in 2015.  A little bit of bad luck got thrown my way and I ended up not running for two and a half months; having knee surgery in April of this year; and did a solid 6 weeks of rehab before running again.  Building my base from literally nothing, I tentatively set the goal of completing JFK for a second time. 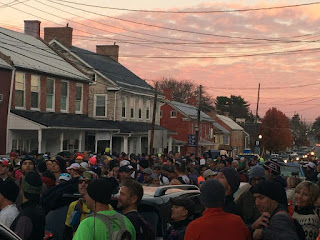 The start in Boonsboro

With my first run being a mere 1.25 miles long in the brutal NC heat and humidity, I knew that I had a long road in front of me.  I committed myself to being patient, and to simply take what my body gave me.  In getting injured, I realized how quickly things can change.  In the course of one day I went from the best shape of my life to not being able to run without pain.  I've always envisioned that I would be one of those that never really stops running.  Having surgery made me realize that may not necessarily be my call.  Going forward I was going to take advantage of the privilege of running. Yet, I wasn't going to force anything happen that wasn't supposed to.  Training wasn't just about getting fit anymore, it was about finding sustainability.

Looking at the entire training cycle, I am really proud of my patient execution of my plan.  My "training plan" went out the window pretty early as I learned the different ways I could push my knee and leg.  In fact, my challenges were not my knee.  Rather my challenges were more about building back equal strength in my legs and avoiding over compensation. I ran two 50ks (Weymouth Woods (6:32) and New River Trail (4:48)) in the lead up and did hardly any speed/tempo work.  I actually love speedwork - ok its really more of a love/hate.  However, it was apparent that the stress of speed and adding the miles to build the base I wanted was going to be too much too fast.  The net result was that compared to last year's JFK, I actually had a more complete and consistent training cycle.  So while I wasn't able to run as fast as I could last year, I felt like I had better overall endurance.

I was very serene in the immediate lead up to the race.  I wasn't worried about time, pace, cutoffs.  I was honestly just happy to be at the starting line doing what I loved.  I knew from last year that I needed to be really patient to have the kind of day that I wanted to have.  In 2014, I had a bad day - or at least a day where my performance didn't reflect the training I had put in.  In 2015 I simply wanted to be wiser and hopefully have a day that allowed me to improve on my 2014 performance.

Start to First Timing Mat (2.5 Miles)  23:30
The start of the race out of Boonsboro has a slight downhill out of town before you climb 600 feet over the next two miles.  I ran this "easy" even if the breathing was a bit labored, but felt fresh hitting the AT and just a little bit faster than last year.  Perfect.

AT (13 Miles)  2:29:00
For me, the hardest part of the AT is the 1.5 to 2 miles before the Weverton Cliffs at the end of the AT.  The earlier sections of the trail vary from non-technical to what I would call "fun running".  These are certainly not running trails to take in the scenery, but they are fun and varied trails that keep you on your toes - quite literally.  The challenge for me comes toward the end of the section where the trail goes up and over the spine of South Mountain a couple of times and then for the mile before the Cliffs you have some of the most awful jagged rock trails that you'll ever have the privilege of running.  In fact during this section, my timing tag (during the race referred to as the doolallie) got caught on a rock and snapped right off of my shoe.  Thankfully, I was able to grab it and have it reattached at the next aid station. 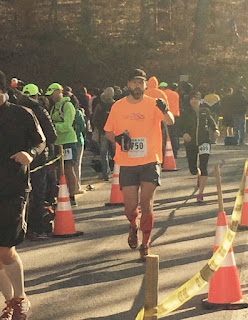 "I need the THING for the DOOLALLIE!"

Towpath - Aqueduct (11.8 miles) 2;07
Entering the towpath you are filled with an initial glee to be on firm, flat footing.  The towpath is an impeccable running surface with gorgeous views of the Potomac river.  Throw in idyllic fall conditions and sharing the trails with your fellow lunatic ultrarunners and you are in heaven.  That is until a mile or two later when you realize that you will have the exact same scenery and terrain for the next 4 - 5 hours.  From this point forward it is all about keeping your head in the game.

For me, this first section of the towpath was where things unraveled for me in 2014 with the onset of cramping that would nag at me for the duration of the race.  In 2015, coming off the AT I was feeling good, but could definitely feel some fatigue from the bounding up and over obstacles for the last 15 miles.  I quickly decided to adopt some run/walk intervals on a proactive basis.  I knew that I could do a 5:1 run/walk for hours and still feel relatively good.  The focus was on being conservative.  I knew that if I was spent for the last 8 miles of road it would cost me much more than whatever I was giving up in walk breaks. 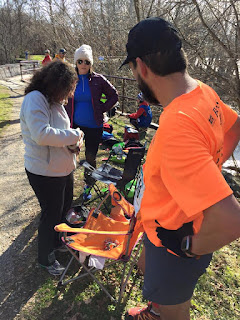 Aqueduct to the End of Towpath (14.5 miles)  2:30:13
Combined, I ended up running the 26.3 miles of the towpath in about 4:52 which wasn't bad, but I honestly felt like I could have pushed harder through here.  Miles 31 - 35 here are the toughest of the whole race.  Given the consistent flat terrain, and that you are past halfway done, but not quite close enough to smell the barn is where the attention and focus wanes a bit.  Around mile 35 I realized that I only had 5 to 6 miles of towpath left and that if I wanted to take advantage now would be the time.  I had a great stretch of running from that point on.  It was hard.  But it was good to teach myself what I am capable of doing and learning what it feels like to push through that fatigue.

Towpath to Finish Line (8.5 miles)  1:31:30
Exiting the towpath you are greeted with a climb of about 125 feet out of the river plain.  By no means a huge climb, but after 41.5 miles it is certainly enough to put the screws to you.  I hit the 8 miles to go marker at exactly 7 hours and 40 minutes.   That meant that if I could average ten minute miles for the last 8, I could finish in 9 hours.  Game ON!  From this point on I was in a racing mindset. It was all about grinding it out.  The challenge in this section is that the rolling hills take the wind out of your legs.  After being ground down by the AT and then a pancake flat marathon, the hills are a tough battle.

At the end, the hills won, but I was again really happy with how I battled through to the finish.  Of the 19 minutes that improved upon from last year's race, 5 of those minutes came in the last 8 miles alone.  My conservative strategy paid off.  Hammering the uphill finish, I had one of the best call outs ever complements of Mike Spinnler. 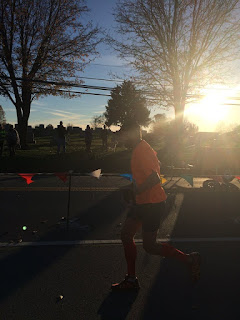 With a finishing time of 9:02:04, I bettered my 2014 time by 19 minutes and change.  PRs are always sweet.  To have a PR at the 50 mile distance almost 7 months to the day after knee surgery is about as sweet as it gets.  The stat that tells the story of my race the best - and that I am most proud of -  is that I only had a 12 minute fade for the second half of the race.

Many thanks to my brother Kevin, Courtney and my wife Jenn for taking crewing for me throughout the day.  When I adamantly said "I need the THING for the DOOLALLIE"  you knew exactly what to do.  Kevin and Court you both took time out of your weekends to see me for but brief moments along the trail.  Your time and support were much appreciated.  To Jenn, who not only supports my endeavors - she now sometimes encourages them - I am beyond thankful to have you on my team. 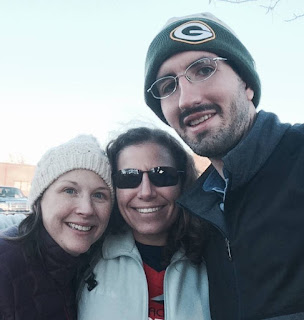 Finishing two minutes shy of 9 hours (an arbitrary time marker, I know) you can't help but think about all the places you could have picked up 120 seconds during the course of the race.  As I reflect on the race and my performance I see lots of opportunities for future races from time management to simply having more experience grinding later races.

After a few weeks of rest it will be time to tackle the next goal and graduate to 100 miles.  I am registered for Umstead this April.   I can't wait to see what that adventure brings!